This is a trade alert that was sent to premium members on Sunday, 4/26…

It has been over two years since the cryptocurrency market first caught the world’s attention, with Bitcoin rocketing to all-time highs around $20,000. The correction to $3,000 was brutal but made sense in the context of the rise that preceded it.

The $3,100 price was a key level of technical support from September of 2017. The price bottomed and consolidated for four months. It then more than quadrupled to over $13,000, before correcting once again back to the $4,000 level briefly in March of this year. This was a bullish pullback as it marked a higher low on the chart. Bitcoin spent a week around $5,000, before climbing steadily higher over the past month.

Note that the price is approaching the key 100-day and 200-day moving averages. It also just broke through a major trend line around $7,700 that has been both support and resistance multiple times in the past few years. The RSI is at 62 with room to continue higher. The 70 level is technically overbought, but Bitcoin’s RSI has a history of peaking in the 90-94 range, so the price has plenty of room to run.

The chart suggests that we could see more consolidation within the symmetrical triangle pattern. But with the halving just 15 days away (estimated at May 12), I believe the odds of a breakout rally back above $10,000 are significant. I don’t think the halving is fully priced in yet and we typically see a rally leading up to the event and in the 6 to 12 months following it. 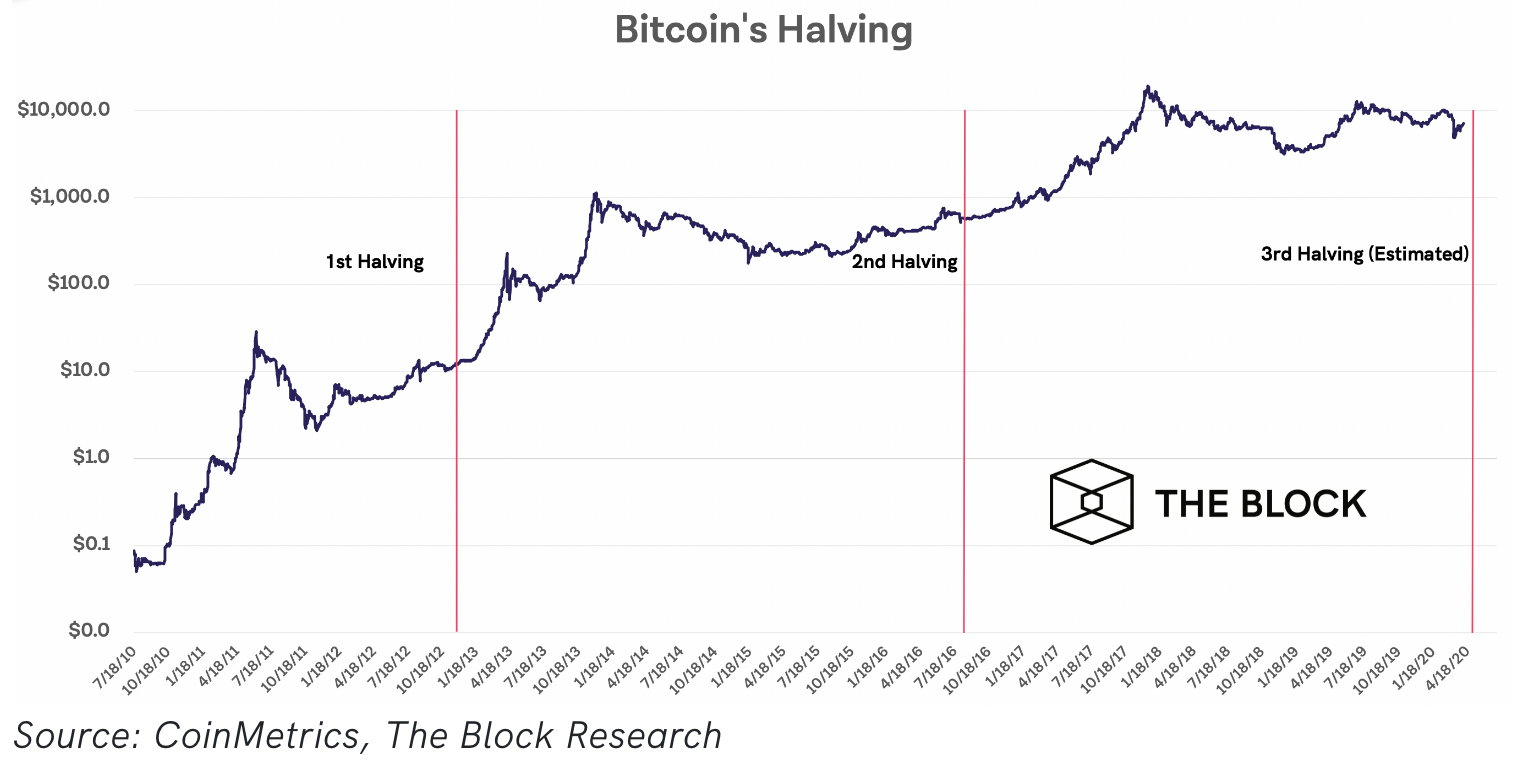 Google’s “bitcoin halving” search volume now exceeds the 2016 peak, with over two weeks still to go. So, while the price has doubled from the lows, the gains are likely just getting started. Bitcoin needs to climb at least 150% from here just to return to prior highs from late 2017/early 2018.

The series of higher highs and higher lows lately is a signal of a bullish price trajectory. In fact, BTC is now approaching $8,000, a double from that momentary March low of $4,000. And as you can see on the hourly chart below, the price just pierced through the $7,700 level, on higher-than-average volume.

As many subscribers know, we were very early into cryptocurrency and have a low cost basis. We first recommended Bitcoin around $100 and Ethereum under $10. My strategy has simply been to continue adding in regular intervals, buying more during major corrections. Stacking Sats. I believe this strategy will outperform for the majority of investors and I prefer it to attempts to time bottoms and tops.

I am a long-term believer in the technology, the decentralization, strictly limited supply, difficulty adjustment, and the monetary revolution that it enables. It was born out of the 2008/09 financial crisis and was created to thrive during moments like these when central banks are creating trillions in new fiat money out of thin air/debt. The money printers (mostly digital these days), but nonetheless, are going Brrrrrrrrrr.

Institutional money is finally pouring into the cryptocurrency markets, with massive volume and premiums in the Grayscale crypto offerings.

Over $6 trillion in stimulus money has been created in the US alone and this number will likely eclipse $10 trillion soon. The FED has cut interest rates to near zero and expects to keep them there for years. Just in the past few days, Bloomberg and others are calling for negative interest rates for the first time ever. Take a look at the change to the FED’s balance sheet in the past few months…

The COVID-19 stimulus of the past month is already many magnitudes more than all of the stimulus created in the 2008/09 financial crisis. Most of the funds are going to corporations and the financial sector, but the government has also been sending money directly to taxpayers. This has the potential to spiral out of control and create high levels of inflation. I see stagflation in the future, which is characterized by persistently high inflation combined with high unemployment and stagnant demand in a country’s economy.

The Congressional Budget Office (CBO) projects the federal budget deficit will hit $3.7 trillion for the 2020 fiscal year thanks to the explosion in emergency spending. This is nearly 4x the typical deficit in recent years!

To put the number into context, the FED has created enough new fiat money in the past two months to buy all of the Bitcoin in existence 50 times over! It will only take a small amount of this new fiat money going into Bitcoin for those price predictions of $100k, $500k, or even $1 million per bitcoin to suddenly not seem so absurd.

Smart investors will be seeking safe haven and capital appreciation in an asset that can not be inflated away and devalued. Some of that smart money will go into gold, but a significant amount will also flow into Bitcoin.

And there is evidence that those stimulus checks are already going into Bitcoin! Both Coinbase and Binance reported a spike in the number of crypto purchases for exactly $1,200 in the past week.


Recent surveys and wallet analysis show that most Bitcoin investors view it as a long-term investment. While the official supply cap is 21 million, it is estimated that 3-4 million have been lost or are otherwise irrecoverable. The amount of bitcoin available for buyers might be far less than we think. And the 1800 available miner coins per day is going to 900 in about 15 days.

It will only take a few very wealthy people to start buying aggressively to cause the price to skyrocket. In fact, the world has more millionaires than Bitcoins. If the whole sum of accessible BTC were to be divided evenly, each millionaire could only own less than half of a single coin.

Bloomberg has just released a Crypto Outlook report and, boy, was it bullish…

I periodically speak to a few crypto insiders that have built some of the most trusted companies and brands in the industry. We catch up about major news and bounce ideas off each other. They share my outlook for higher prices over the next several months and believe we have officially entered the next bull cycle. Of course, they could be wrong, but this is another data point for your consideration.

The Bitcoin stock-to-flow (S2F) model is wildly bullish. It boasts a 95% correlation to historical Bitcoin price data was popularized by Bitcoin quant analyst Plan B.

Assuming 5% lost coins, the model suggests that Bitcoin should reclaim a $10,000 valuation by mid-July 2020, with the price then ascending back to all-time-highs of $20,000 by November of this year. Following the 2020 Bitcoin halving, Plan B’s model is projecting that Bitcoin will carry on its multi-decade parabolic ascent and hit $1 million following the 2024 halving and a colossal $10 million after the network drops its block rewards from 450 to 225 BTC a day in the summer of 2028.

Those are some lofty projections, but they are rooted in a model with data to back up the projections. And even if the price only rises by a fraction of what the model predicts, it still represents one of the best asymmetric investment opportunities of our generation.

I also expect a major price rally for Ethereum (ETH) over the next six to twelve months. In fact, even though the Bitcoin halving is approaching, I believe ETH is likely to outperform in 2020. This is due to the upcoming launch of ETH2.0, performance improvements, the move to staking, and the growing DeFi ecosystem that will result in significantly more ETH getting locked up and unavailable to buyers. Bullish factors include:

The Ethereum chart shows what has essentially been a basing/bottoming formation for the past 16 months. My upside target from this chart is for ETH to climb into the $700 to $800 range within the next year.  That is upside potential of 4x and would still be $600 shy of the all-time high around $1,400. Returning to that level would represent more than a 7x (600%) gain from the current price.

In addition to Bitcoin and Ethereum, I remain bullish on… (member content) …are recent additions to our watch list that I think have potential.

I am earning considerable compounding interest by staking (member content). I recommend this website for more information about staking. I am also earning interest of 6% on Bitcoin, 4.5% on Ethereum and 8.6% on Gemini Dollar (a stablecoin) via holding some of my crypto at Blockfi.com (I get a little crypto if you use this link).

There is some degree of counter-party risk involved, so I only keep a small portion of my crypto funds there. But they custody their crypto with Gemini, which is insured and just received a new security qualification, SOC 1 Type 1.

Gemini is run by the Winklevoss twins (of Facebook fame) and is fully licensed. While there is always some degree of risk when you don’t hold your private keys, I think they are as legit as it gets in the emerging crypto sector.

So just to recap, I have turned increasingly bullish on the cryptocurrency sector in the near term and I have added to my positions in Bitcoin (BTC), Ethereum (ETH) and (member content) today. I don’t advocate going “all in” at any single juncture and prefer simply adding to positions in regular intervals.

But I am adding more than usual this month as we approach the Bitcoin halving event, bullish factors for ETH grow and central banks have the money printers running at full speed. I really believe that Bitcoin was made for moments like these and is likely to thrive in this bizarre new financial paradigm that has accelerated due to the pandemic.

While the percentage gains are not going to be as large as they were during the earlier bull cycles, I still believe that cryptocurrencies will outperform all other asset classes over the next few years. We are still in the early innings and there is still plenty of time to create generational wealth by investing in this sector.

Check out our Bitcoin price prediction for 2020 and the year ahead.

As always, feel free to email me with any questions or comments. And if you are a Mastermind Member, please be sure to join us in the Chat Room daily.

Get all of our research into cryptocurrencies and blockchain/crypto-related equities, plus our top picks by subscribing today. Your subscription includes the monthly newsletter, regular updates and our real-time portfolio.

You will also receive our Guide to Investing in Cryptocurrencies and get access to our team of experts to answer your questions within 24 hours.

If you are also interested in precious metals, mining stocks, technology stocks, and other sectors, you can subscribe to our Mastermind Membership. Subscribers receive an all-access pass to all of our newsletters, portfolios, trade alerts, plus the Nicoya Research Chat Room. We are active in the chat daily, posting news, charts, updates, and trade ideas.